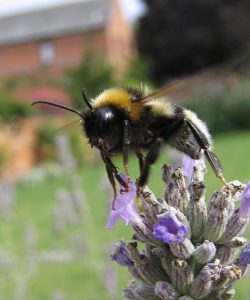 1990’s? Approximately 20,000 beekeepers kept honeybees in the 1990’s but that number has shrunk to about 5,000 beekeepers due in large part to the aggressive killer bees, also called Africanized bees.

Honeybees were a huge industry in Arizona. Beekeepers would send hives to California to pollinate almond and other crops. Mites, pesticides, drought, disease, and Africanized bees have contributed to the decline of the Arizona honeybee over the years.

The good news is that they are making a comeback but if you’ve got a hive or swarm in your yard, be careful. You may not have the docile honeybee. There’s a good chance you have the Africanized version.

What are Africanized bees?

Arriving in Arizona in 1993 as the result of a lab experiment in Brazil that went awry, killer bees have been wreaking havoc on the Arizona honeybee population. Honeybees are a relatively docile bee of European decent and they need a Queen bee to keep the hive alive.

Africanized bees began taking over honeybee hives with their Queens. The worst part is that these bees reproduce three times as often as a honeybee. That meant the honeybee population was overtaken with Africanized bees.

And they don’t call them killer bees for nothing. They protect their hives and are known to go after anyone who gets in their way. Among the stories is the Douglas swarm of 800,000 Africanized bees that killed one man and injured three other people in 1995.

Have you seen a large number of bees flying around your yard or stuck on a tree or patio furniture? It’s likely you have a swarm of bees.

Don’t bother them as they are quite protective of their territory especially if they are Africanized bees.