3 Types of Scorpions Found in Phoenix 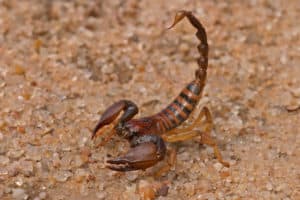 Have you seen a scorpion in or around your Phoenix home? They’re crablike in appearance with four pairs of legs, pincers, and a long segmented tail that curls. It’s the tail that can sting you. Even though only 25 of the 1000+ known species of scorpions are venomous, a sting can still make you sick or get infected.

The most common types of scorpions found in Arizona include the Desert Hairy Scorpion, Bark Scorpion, and Stripe-tailed or Devil Scorpion.

You wouldn’t want to meet this guy in a dark alley or in your garage especially if you’re not wearing shoes. It’s North America’s largest scorpion at 5-7” in length. Covered in tiny brown hairs, the Arizona Hairy Scorpion has a standard scorpion pair of pincers, and a venomous tail. The venom (thankfully) isn’t very potent. You may get an allergic reaction but it is likely not a life-threatening sting for humans.

This isn’t your average scorpion that’s just walking around on the ground, hiding in cracks and crevices. The Bark Scorpion is light brown in color, up to 3” in length, and has the ability to climb and can be found in your bathtub, inside walls, or hiding in a dark closet. Found in Arizona, Southeastern California, New Mexico, and Sonoran Mexico, this is the most venomous scorpion in North America.

The most common scorpion found in Arizona, the Devil Scorpion, also called Stripetail, is 2.5” in length, and light brown in color with stripes on the upper side. Be especially careful when you’re moving rocks or other stationary objects in your yard, garage, or other dark place as these scorpions are relatively small and love hiding underneath things. They are venomous but not considered dangerous.

Seek medical attention if you or someone you know has been stung by a scorpion.

And while life in the desert means that scorpions and other pests are a way of life, you can improve your chances that you’ll never see a live one on your property with regularly scheduled pest service.

If you see scorpions in or around your home, keep a safe distance!