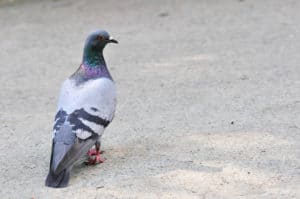 When thinking of pigeons, your mind might automatically go to New York City, where they are just part of city life. But the truth is that pigeons live across the United States — and world — and they can cause a big problem for homeowners. How can you create an environment that is not a haven for these city dwellers?

Although urban pigeons are technically birds, many people consider them to be rodents, if purely for the damage and annoyance they cause. From droppings across roofs and patios to nests built in eaves that can cause structural damage, they are a real problem for many Phoenix residents.

Pigeons are considered an invader species, meaning they are not native to Phoenix and tend to spread, potentially causing damage to the environment and human health. No one can say exactly how they got to town, but they certainly don’t seem to be leaving anytime soon.

Many people equate pigeons with disease. Although pigeons and their droppings carry more than 40 viruses and 60 diseases, there has never been a case of pigeon to human disease in Arizona. When humans handle any wild animal or its feces, there is a possibility of disease transmission, which is why people are encouraged to thoroughly wash their hands after cleaning up their droppings.

The high acidity in their feces causes a 50% reduction in roof life and can ruin paint on vehicles, say authorities. And if they can find a place in attics or on roofs to build nests, their droppings and residency can also cause structural damage.

Unfortunately, pigeons don’t need specific conditions in which to live. Although water is nice, a nearby lake doesn’t attract them; they can get the water they need from birdbaths and fountains in your yard. And their favorite food is grass seed, which is abundant in many neighborhoods, especially during the times when yards are reseeded. Even the extreme temperatures in Phoenix aren’t enough to deter them from living here.

How to Keep Pigeons Away

If you’ve been downtown in Phoenix, you’ve undoubtedly seen bird spikes on the tops of buildings. Some homeowners will opt to install these on their roofs or awnings if pigeons are a problem. Another option is to put a fake owl on the top of your home, since pigeons are wary of owls, one of their natural predators. Remember, though, that pigeons are smart and will eventually figure out the owl is stone or plastic.

Be sure to close off any entrances to your attic and crawl space so they can’t find a way inside to perch and nest. You can also cover awnings or other possible nesting places with netting to discourage them from staying there.

When you cannot curb your pigeon population yourself, it’s time to bring in reinforcements. You can trust the professionals at Budget Brothers Termite & Pest Elimination to provide guidance and support in eliminating pigeons from your home or business. We understand the way they think, and we work to relocate them and make your home the one to avoid.