Have you ever thought about eating scorpions? 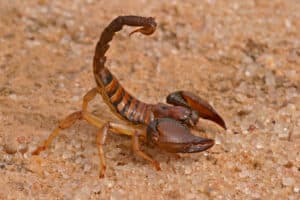 We never did until we watched this season of Survivor when contestant Mike Holloway ate one, claiming it was a good source of much-needed protein.

We can’t deny that in some cultures eating insects is as common as us eating burgers but this was a little extreme, even for Survivor.

We should note he chose to eat the scorpion and it was not part of a contest – that just made it even weirder to us – and Mike ended up getting pretty sick from eating a small scorpion.

(Just so you know, Budget Brothers Termite & Pest Elimination does NOT recommend eating scorpions. At least, not ones you find around the house).

If you see a scorpion in your home or workplace, don’t be like Mike. It’s not a snack.