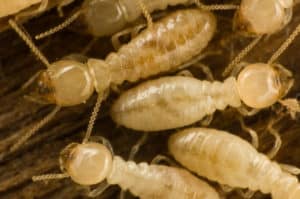 When most people think of termites, they think of wetter climates than Phoenix but the truth is, termites can live in the desert as well as any other part of the country. The two most common types of termites in Phoenix are subterranean and drywood.

While their habitat and colonies might differ, they are both destructive forces, costing Arizonians millions of dollars in damage. Catching them early is key to protecting your home and yard.

Types of Termites in Phoenix

Subterranean termites make Alaska look like an attractive place to live as they are found in every state except Alaska. They love warmer climates like ours and make homes in the soil. Building miles of underground colonies using thousands of workers, subterranean termites can infest entire neighborhoods virtually undetected.

A subterranean termite colony consists of:

They typically feast on structural or framing wood, wood piles, and when these sources aren’t available, they will dine on plant material and cardboard which contains their favorite food – cellulose.

Whether subterranean or drywood, termites in Phoenix cause a lot of damage.

If your neighbor has said they have termites, you’re going to need help!