When it comes to bugs and creepy crawlies, you are either on one side of the fence or the other. The first is to be fascinated by bugs 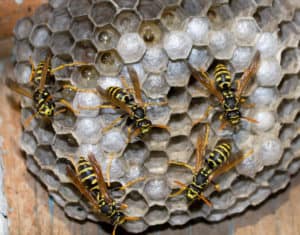 and insects, even if you don’t want them in your house; the other is to be completely “bugged” out by those things crawling or flying about, whether at home or out in the open natural world. But there are some creatures that most people try to avoid because, well, they seem to provide very little — if any — value. One group of insects that almost everyone in Phoenix puts on his or her “avoid” list is wasps.

Wasps: What Are They Good for?

Even if you are downright frightened of wasps and think they’re only job is to get into your home or backyard and sting you, you may be surprised to know that they actually do some good for the environment. Wasps are parasitic, meaning they prey on and need others, or hosts, to live. Those hosts are the rest of the insects in the world. In fact, almost all pest insects have a wasp variety that considers it food. So, as hunters, wasps help to reduce the insect population, making them a round-about friend of humans, much like spiders.

Of course, even though wasps play a crucial role in thinning the insect herd, that doesn’t mean you have to like them living on your property.

Did you know that there are more than 100,000 species of wasps? The Phoenix area is host to many wasp varieties including the common yellow jacket wasp (these are the nasty guys with the yellow and black stripes), the mud dauber wasps (they’ve got long skinny waists and build their nests out of mud), and the dreaded paper wasp (theses are the nastiest of the breeds found in the valley as they are exceptionally aggressive).

All wasps are categorized into two subsets: solitary or social. As the terms imply, solitary wasps live alone while social wasps remain in colonies of 3,000 to 20,000 with one or more queens. Queens tend to live about one year. For social wasps, this means hibernating in the winter, building a colony in the spring and laying the initial eggs to have additional workers (sterilized females) who can continue building the hive, and then dying off, allowing the last-laid eggs — fertile females and male wasps — to continue into the next season. The solitary wasps have a similar life-cycle, although they don’t work together as much to grow colonies, preferring a lonelier lifestyle.

As you likely have discovered, perhaps inadvertently, wasps live in hives or nests. They can be as small as a walnut or as big as 20” across. Wasps tend to start their nests in many different places, but they’re often in the sun at some point during the day. Look for wasp nests in holes underground; along riverbanks; attached to the sides of buildings, trees, or plants; or under the eaves of buildings. Wasps are most active at dawn and dusk, so that’s a good time to spot them going to and from their nests. And remember, wasps will sting humans and animals when provoked. Unlike with bees, who release the stinger into their victims at the first sting, it remains attached to wasps, who can sting repeatedly.

If You Have Wasps…

Wasps can big a big issue year round in the hot desert climate since they like the sun and heat. If you suspect you have wasps, you should call the professionals at Budget Brothers Termite & Pest Elimination. Do not undertake the task of getting rid of wasps on your own; you’re just asking for trouble if you do.