If you’ve ever experienced an ant infestation in or around your Arizona home, you know how much of a pest they can be. Scientists 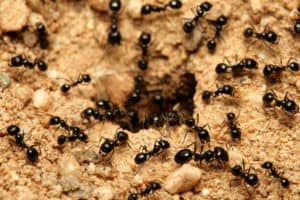 estimate there are as many as 20,000 species of ants around the globe but don’t panic. There are only five types of ants in Arizona. While ants are small in size, it can be a challenge to get rid of a colony of them in your yard.

Ant societies are quite complex. Most operate under a caste system ruled by a fertile, winged queen. Worker ants include fertile, wingless, females and winged males, also known as drones. Also referred to as kings, drones are fertile winged males born from unfertilized eggs. It is the job of a drone to mate and soon after mating they die. Soldiers are wingless infertile female ants.

It is the job of the queen to lay eggs. Yep, that’s pretty much all she does. Much responsibility of watching the eggs and tending to the young falls to the Workers. In addition to child-rearing, Workers forage for food for the colony and defend the nest from unwanted visitors.

ANT FACT: Each colony of ants has its own scent making it easy for them to sniff out intruders.

While you don’t want them at your picnic, ants are pretty clean for an insect. Worker ants are often given the role of cleaning garbage putting it outside the nest in a special garbage pile.

For tiny pests, ants can really make an impression.

As ants travel across your yard, neighborhood, or larger area, they move eggs and larvae to safe places where they will be protected and kept warm. In the morning they are moved to the top of the nest to stay warm.

ANT FACT: If a worker finds a good food source, they leave a scent so other ants can find it. That’s how you get ant trails in or around your home.