While you might consider most types of bugs to be troublesome, there are some that are definitely worse than others. Take termites 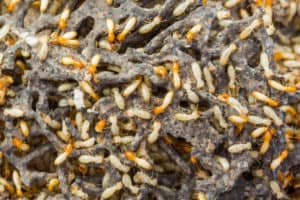 , for example; they cost homeowners billions of dollars each year, both in the damage they cause and in the effort to get rid of them. Unfortunately, termites can be in a home for years before they are detected — and it’s often because the homeowner discovers the damage and begins to investigate the cause. By then, however, it’s become a large cleanup process.

Where the Problems Start

The first issue with termites is that they are pervasive. Every state in the Union has termites, and you don’t have to live in a refurbished barn house to attract them. Redwoods are the only wood that repels termites, and since that’s not used in new construction, you’re at risk. Even if your home is built from something other than wood, your floors, furniture, and the drywall often have wood components that termites consider tasty food.

Termites also reproduce quickly — and in great numbers. A single colony can have hundreds of thousands of inhabitants, and although each is just a few centimeters long, the whole of them requires a great deal of sustenance. Some bug experts have even estimated that a hungry colony can eat around 12.9 pounds per year. That doesn’t mean they’ll be like a child’s cartoon, just mowing down boards and walls; they tend to eat from varying sources, which is why the damage is that much more challenging to spot.

What Kind of Damage to Expect

While it’s true that, given time, a colony of termites could cause enough structural damage for an entire building to collapse, that’s not a worry you need to have filling your head. In actuality, it would take years for that level of damage to occur. That doesn’t mean that a termite infestation is a situation to be taken lightly, however. Once termites have taken up residency, they tend to put down some deep roots and spread out quickly.

Obviously, you may find damage in your home in the form of holes in wood areas, including floors, walls, beams, and even furniture. If solid wood sounds hollow when you knock on it, it’s a good indication you may have more serious issues.

How to Spot Termites

In addition to obvious damage in the wood of your home, termites can be spotted during swarming time, when the winged members of the colony fly off to begin new communities. If subterranean termites are on the premises, mud tubes on the walls and base of the home are telltale signs of a problem. [Read our complete blog on types of termites and how to identify them.]

Getting Rid of Termites

It’s a good habit to have your home inspected for termites annually. That way, if the bugs do choose to move in, you’ll have a better chance of catching them early. Unlike some other bug problems that may have you running down to the hardware store for some DIY remedies, termites are not to be trifled with. They have such large colonies that it’s nearly impossible to rid your home of them without the proper tools.

If you suspect you may have termites — or want to assure yourself that you don’t — call the pest-elimination specialists at Budget Brothers Termite & Pest Elimination. We have the experience and know-how to seek out termites and get rid of them — before the damage gets out of hand.