Not everyone hates spiders – some people see them as cute, a part of nature, or even harmless.  But, there are quite a few people out there that also consider them a pain to live with, creepy – or plain disgusting.  If you’re one of those people that hates spiders you might be curious to know 4 more spiders you might find in Phoenix; what they look like, how they nest and where to find them.

Ready to learn about 7 other spiders found in Phoenix? 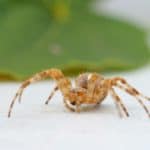 A common house spider is one of the most common spiders you will find in your home.  The common house spider is also known to be quite a nuisance but maybe not for the reason you expect.  It’s the web that can be a pain, not the actual spider itself.  While this spider is found worldwide, the 2 most common places are in the United States and Canada.  This spider tends to have an almost yellowish-brown color to it and may have dirty white stripes on its stomach and several dark stripes on its body or legs.

These are not poisonous.

The easiest way to keep them out of your home is to keep their webs down.  if they don’t catch any prey with their webs, they will move on to another location.

Every time someone sees one of these small bodies and long-legged creatures, they automatically call it a Daddy Long Leg.  But, this is tricky.  There are opilionids arachnids that have a pill-shaped bod and 8 legs – these are not technically spiders.  Then there are pholcids that have long legs and smaller bodies – they resemble opilionids but they are true spiders.

These spiders tend to live in dark and damp locations, that means they are commonly found in attics, garages, under your sink, and outside.  Daddy Long Legs are completely harmless.  They hardly ever bite people and if they did, you would feel a light tingling sensation, nothing compared to a venomous spider like the brown recluse. 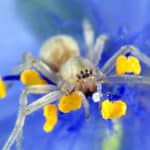 The yellow sac spider is a smaller spider – it’s only around 1/4 inch long for both males and females.  These are very easy to tell apart from something like a common house spider because of the colorization – these are a pale yellow to creamy yellow color and the tips of their legs and fangs tend to be a brownish color.

The yellow sac spider tends to be found more outdoors – they like foliage, soil, old leaf piles, and bushes.

These are poisonous spiders.  Most of the time when they bite you will just have a bit of pain and itchiness, but in other situations, they can cause worsening symptoms such as fever, nausea, and lesions. 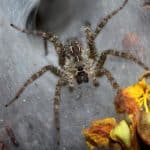 There are 2 types of funnel spiders – those found in the US and those found in Australia.  The ones in the United States are not considered to be dangerous.  Funnel spiders in the US are around 1/5 inch to 3/4 of an inch.  Their color ranges from a brownish or almost grayish color, while their legs tend to be hairier than other spiders.  They also have bands on their legs that are a darker color.  The funnel spider also has a long, almost tail-like structure at the rear of the body. And this is what they use to create the funnel webs they are so famously known for.

These are less commonly found indoors and instead, take to the outdoors for shelter and food.

Get Rid Of Those Spiders

If you find spiders of any variety living in or around your home, call Budget Brothers Termite & Pest for all your pest control, and spider control needs.