Thankfully, with Phoenix being in such a desert climate, it’s not a huge haven for mosquitos, but these pests of the insect world do 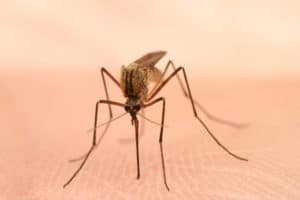 cause problems across the US, regardless of climate. In comparison with wetter areas, they may not seem to be as bad here, but mosquitos carry very dangerous diseases, and getting rid of them should be a top priority.

Mosquitos have been around since the Jurassic period, making them about 210 million years old. Since they are cold blooded, they prefer temperatures above 80ºF and actually hibernate in the winter, which is why they are more prevalent in the summertime. They also require stagnant water in which to lay their eggs so that they can grow into larvae; mosquito larvae can live in just 1” of water, and they spend the first 10 days of life underwater. During that time, they feed on organic matter in stagnant water and breathe oxygen from the surface.

There are more than 3,500 species of mosquitos, with about 175 types being found in the US. Although they live less than two months, they can wreak a lot of havoc in that time.

The Problems with Mosquitos

We all know that mosquitos bite and suck blood from their victims, but do you know why? Only females bite, actually, and although mosquitos exist mainly on fruit and plant nectar, the females need the protein in blood to help their eggs develop. Females ingest up to three times their weight in blood, then rest for a couple of days before laying their eggs — in stagnant water, of course. Females will lay eggs up to three times before dying.

Since mosquitos are biting a number of hosts to get enough blood, they carry diseases from one person to the next. They are considered to be the deadliest animal in the world because of this fact, and mosquitos carrying the West Nile virus have been found around the globe. Notably, in the summer of 2013, Maricopa County Environmental Services Department recorded 30 cases of the West Nile virus in humans and two deaths. During that year, the department found more than 130 positive mosquito samples.

Curbing the Spread of Mosquitos

Thankfully, since there is little standing water in the desert, mosquitos don’t have much opportunity to breed in the Valley of the Sun. But during the rainy season, flooding leads to puddles, many of which don’t recede for a few days. A bigger issue, perhaps, may be untended swimming pools. With the foreclosures and short sales of recent years, houses have been abandoned, leaving pools to go green. That’s prime breeding ground for mosquitos.

The best thing you can do to keep mosquitos from invading your property is to keep it free of standing stagnant water. Clean your pool regularly and ensure it doesn’t go green; don’t water your lawn so much that puddles form; ensure proper drainage on your property. All of these things work together to keep pesky female mosquitos from eyeing up your home for breeding grounds.

The best determent to biting mosquitos is DEET (a common chemical used in personal pest repellant). If you prefer a more natural method, lemon-eucalyptus oil is recommended by the Centers for Disease Control, along with products containing 10% DEET.

If you have stagnant water that is attracting mosquitos — or you find larvae in the water — a professional pest control company, such as Budget Brothers Termite & Pest Elimination, can use special bacteria to kill them before they are ready to fly. Mosquito traps can be used to catch the adult pests, and if the problem is really big, the county may fog areas to kill the mosquitos.

Remember, although the bites are a literal pain, mosquitos cause a bigger health problem. If they are overrunning your property and you cannot fix the situation by removing stagnant water, reach out to Budget Brothers Termite & Pest Elimination. Protect your family and stop the itching. Call us at 602-253-2495 for service!